My guitars were all built from Warmoth components finished in Tru-Oil, the hardware was mostly from Gotoh, and I wound the pickups myself.

A Telecaster - sort of

What I call my "Tele" is a hybrid instrument that started with a good deal on a fat, used, all-maple Strat neck.

Using 1952 Telecaster specs for a reference I paired the neck with a custom swamp ash body and tweaked to taste. The only real departure from my reference was the neck pickup: cosmetically it's a nod to the Broadcaster, but it's wound 8% hotter than a '52 Tele and uses A2 polepieces for additional warmth and sustain.

More than just a pretty face

It took five prototypes, endless tinkering, and a few recording projects, but eventually I achieved what I originally set out to create in 2011: a guitar that is pleasing to my ears while being versatile enough for gospel, traditional jazz, classic rock, and fusion.

The swamp ash body and fat all-maple neck create the round, clear tone that made me fall in love with my Tele, and the pickups are wound to the same specs. A metal plate under the bridge pickup, a Tremolo-No, and a neck/bridge pickup combination in the middle position allow the guitar to function like a Tele if I want it to. A hum cancelling backplate makes it suitable for extreme gain, while no-load tone pots compensate for the associated treble loss. The tone circuits are bypassed entirely in the middle/bridge pickup combination.

Since 2016 my recordings have all been of my Tele directly plugged into a 50W Red Plate Dave Fields Custom. My backup recording amp is a 15W Fender Pro Jr Ltd.

At church I use the pedal rig shown here, which feeds into a 30W Fender Deluxe Reverb Reissue.

This section is for me: a memorial to the custom-built guitars that I loved and laboured over, but were nothing more than steps on the journey. 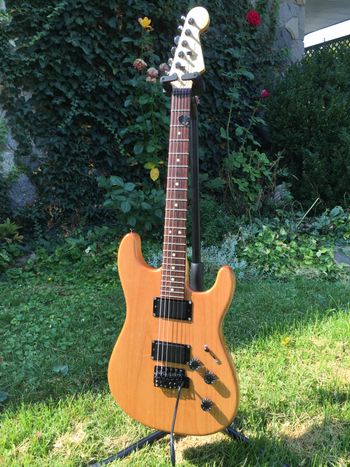 2011: My first custom build: a Gibson-scale Strat loaded with hybrid humbucking/single-coil pickups of my own design. It was eventually sold to a colleague. 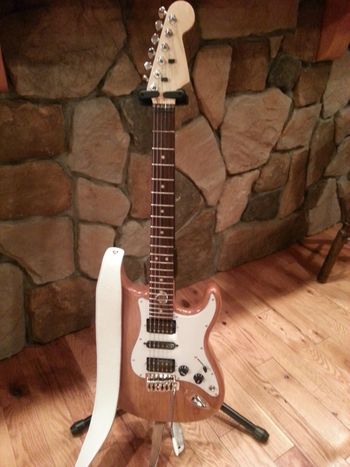 2013: My second guitar was the same as the first, except for that middle pickup. I chose white for church, and got a strap to match. It was ultimately disassembled and sold for parts. 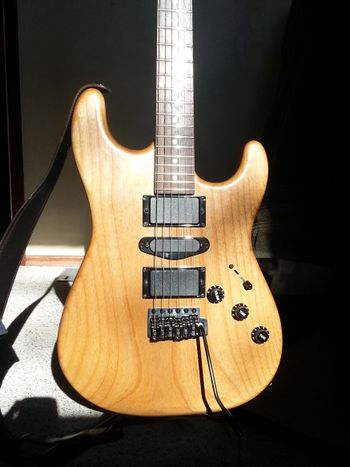 2014: My Unhooked guitar was the most mature version of my hybrid pickup system. It was "unconverted" to a 25.5" scale for my 2015 concert. It ended up as a gift to my engineer/co-producer Norm Robidoux. 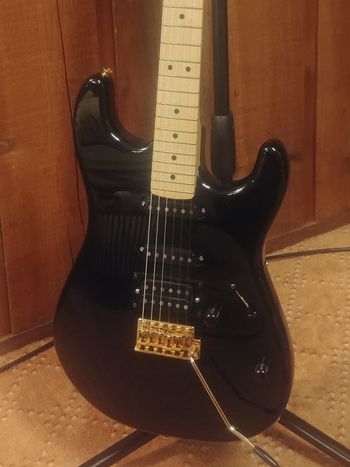 2016: My fifth guitar was inspired by Telecaster tonewoods and was the last design to utilize my hybrid pickups. I performed with it once in Everett, but it was ultimately disassembled and sold for parts.

Like every other serious electric guitarist, my sound is the product of an ongoing journey into gear and into my own taste as an artist. A custom DIY approach was the right path for me but it was a long, strange trip that took me essentially to hot-rodded gear from about 1967. I wouldn't recommend my path to anyone but the most obsessive.

That said, and setting aside the very different worlds of hollow bodied or metal-oriented guitars, my own journey has left me with a number of firm views: